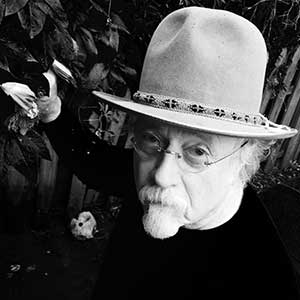 During his fifty-year career Bridger has performed all over America and Europe as well as landmark tours of the former Soviet Union, and Australia. Bridger started performing regularly in public upon entering college in 1963, but his career as a recording artist began in1967 in Nashville recording first with Monument Records and later for Nugget Records. In 1970 Bridger produced Merging of Our Minds independently in Nashville under the supervision of his mentor, legendary studio musician and record producer, Fred Carter, Jr. Bridger signed with RCA Records and music publishing giant, E. H. Morris in Hollywood in 1971. His songs have been recorded by artists ranging in diversity from pop (Bobby Goldsboro), country (Claude King), blue-eyed soul (Little Richie Jarvis) and rock (the Lost Gonzo Band). RCA released Merging of Our Minds, and, And I Wanted to Sing for the People (produced by Ron Kramer) before Bridger left the label in 1973. Bridger, western character actor, Slim Pickens, and the original Lost Gonzo Band recorded Bridger’s classic “mountain man ballad”, Seekers of the Fleece, (Part One of the epic trilogy A Ballad of the West) in 1975 in Denver. Fred Carter, Jr. and Bridger co-produced Heal in the Wisdom in 1980 in Nashville and Austin.The title song, Heal in the Wisdom, has been the beloved official anthem of the internationally famous Kerrville Folk Festival since 1979. Bridger also suggested the Kerrville Festival’s “Ballad Tree” to festival founder Rod Kennedy in order to create a venue for unknown songwriters to try out their work. Bridger performed on 28 consecutive festivals, served on the festival’s board of directors from 1976-2002, and has served on the board of advisors since 2002. In 1988 performed Heal in the Wisdom for closing ceremonies for the United Nations First Global Forum of Spiritual and Parliamentary Leaders on Human Survival at Oxford University.

Bridger’s renowned epic trilogy, A Ballad of the West, has been widely acknowledged by a distinguished spectrum of legendary late 20th century western historians such as Vine Deloria,Jr., Dee Brown, Frank Waters, Alvin Josephy, by noted producers, screenwriters, and actors such as, Dale Wasserman, William Wittliff, Alan Menken, and Marlon Brando, and organizations like the Smithsonian Institution. After two summer seasons workshopping the epic ballads in Grand Teton National Park (1972-’73) Bridger debuted his theatrical one-man shows of A Ballad of the West in Austin in1974 and toured them extensively throughout America and around the globe until 2011. Live performances of Parts One and Two of “Ballad” (Seekers of the Fleece and Pahaska) were retired in 2006 and 2011 respectively, but Bridger continues to tour Part Three of “Ballad”, Lakota, accompanied by master guitarist, John Inmon. Full-company outdoor musical productions of Seekers of the Fleece were produced in Wyoming from 1988-1994. From 1982-’83 Bridger starred Dale Wasserman’s Shakespeare and the Indians and in the ground-breaking 1984 American Indian Theater Company production Black Elk Speaks with David Carradine and Will Sampson. Bridger has performed twice on PBS’s Austin City Limits, on PBS’s American Experience, twice on C-Span/Booknotes, once on ABC’s Good Morning America, on CNN, on A&E, on National Public Radio, and on the Australian Broadcasting Company. Bridger has been an artist-in-residence at Yellowstone and Grand Teton National Parks, the Buffalo Bill Historical Center, the Eugene O’Neill Theater Center, and the John G. Neihardt Center. From 1980-1988 Bridger served on the Board of Directors of the American Indian Theater Company in Tulsa. Aside from nine studio albums, Bridger is the author of four books, A Ballad of the West, Buffalo Bill and Sitting Bull: Inventing the Wild West (Foreword Magazine’s Best Biography of 2002), Bridger (autobiography), and Where the Tall Grass Grows: Becoming Indigenous and the Mythological Legacy of the American West. Bridger’s script for the DVD of A Ballad of the West was the Western Writer’s of America’s 2008 finalist for their “Spur Award” for Best Documentary Script. Bridger is the subject of the sixty-minute documentary film, Quest of an Epic Balladeer, featuring interviews with Vine Deloria, Jr.,Floyd Red Crow Westerman, Fred Carter, Jr., Dale Wasserman, Max Evans, Rod Kennedy, Joe Sears, John and Jim Inmon, Bob Livingston, John T. Davis, and others. Bridger is the recipient of the John G. Neihardt Foundation’s prestigious 2016  “Word Sender” award.